Dung and urine are rich in plant nutrients, and clear evidence of this is the accelerated pasture growth where these products are deposited. Each animal is in a sense a “fertilizer spreader”, and farm management practices need to take this into account in order to make the best use of these nutrients and to avoid unnecessary expenditure on fertilizer and lime. Nutrients in dung and urine The feed consumed by animals – be it pasture, hay, silage, TMR or concentrates – is rich in plant nutrients. Only small proportions of these nutrients are used for meat and milk production, with the remainder being excreted in the dung and urine. In the case of dairy cows on pasture, the approximate percentages of N, P and K excreted are shown in Table 1. The total amounts of nutrients excreted by a cow in a year are considerable (Table 2), with the amounts of nitrogen and potassium being the largest. Attaching a rand value to these nutrients underlines the economic significance of the recycling process. It should, of course, be borne in mind that the monetary value reported in Table 2 does not include that of the secondary nutrients, sulphur, calcium and magnesium, or of micronutrients such as zinc, copper, manganese and boron. And there is also the value of the dung in terms of its contributions to soil health (through improving soil organic matter levels, soil structure and biological health). Why the high fertilizer requirements on livestock farms? Given that the removal of plant nutrients from the farm in milk and meat is minimal, why is there an ongoing need for such large amounts of fertilizer in typical livestock operations? In the case of nitrogen, there is a partial explanation, in that large amounts of this nutrient may be lost by leaching from the rooting zone and by volatilization to the air from urine patches. But phosphorus and potassium are not lost in these ways, and one would expect long-term fertilizer requirements for these nutrients to be low on intensive livestock farms. The principal reason for the ongoing high requirement for fertilizers is that because of the movements of animals and feeds, nutrients get depleted from certain areas of the farm and concentrated in other areas. To illustrate this, let’s take a look at nutrient flows in a typical pasture-based dairy-farming operation (which includes silage and/or hay-making). On a farm of this kind, because of the movements of animals and feeds, there are large-scale flows of nutrients from one area to another. These flows are illustrated in the diagram, and result in a concentration of nutrients in areas where animals spend significant amounts of time and are fed (shown in blue), and a depletion of nutrients in more distant areas (yellow), and in particular in those areas in which feed is grown and removed. Plant nutrients are, of course, brought into the system in the form of fertilizers, lime and purchased feeds. Similar nutrient flows occur on intensive beef and sheep operations….

By Mark Hawksworth | Conferences and Training | No Comments

Welcome to Agrispex; I’m delighted to officially launch Agrispex today as I begin my 30th year of service to the fertilizer industry. There is no doubt that climate change is a reality as is the fact that the world population will increase by 400 million people within the next five years, placing greater demands on agriculture to produce staple foods while at the same competing with urban populations and industry for limited water resources and arable land. Exciting advances in agricultural production including the integrated use of bio-fertilizers, bio-stimulants and bio-pesticides in fertilizer programs combined with new technologies continue to  enable commercial agriculture to successfully face the challenges of increasing  production costs and fluctuating returns determined by the supply and demand for safe food. South African soil erosion losses are estimated to be 300 million tons per year which combined with the losses of soil nutrients, soil organic matter, reduced soil water holding capacity  and increased soil acidification collectively threaten sustainability. The adoption of conservation agriculture practices are essential for long term maintenance of our soils, biodiversity and natural systems; especially our rivers, estuaries and marine ecosystems. The long term aim of Agrispex is to promote  soil productivity and the conservation of agri-ecosystems through the publication of scientifically based short articles that are easy to read, can be understood by the layman and serve as an on-line technical manual for students, farmers, agricultural advisors and marketers in the future. I trust that you find the current and future articles published useful and interesting and wish you successful visits to Agrispex in the future. 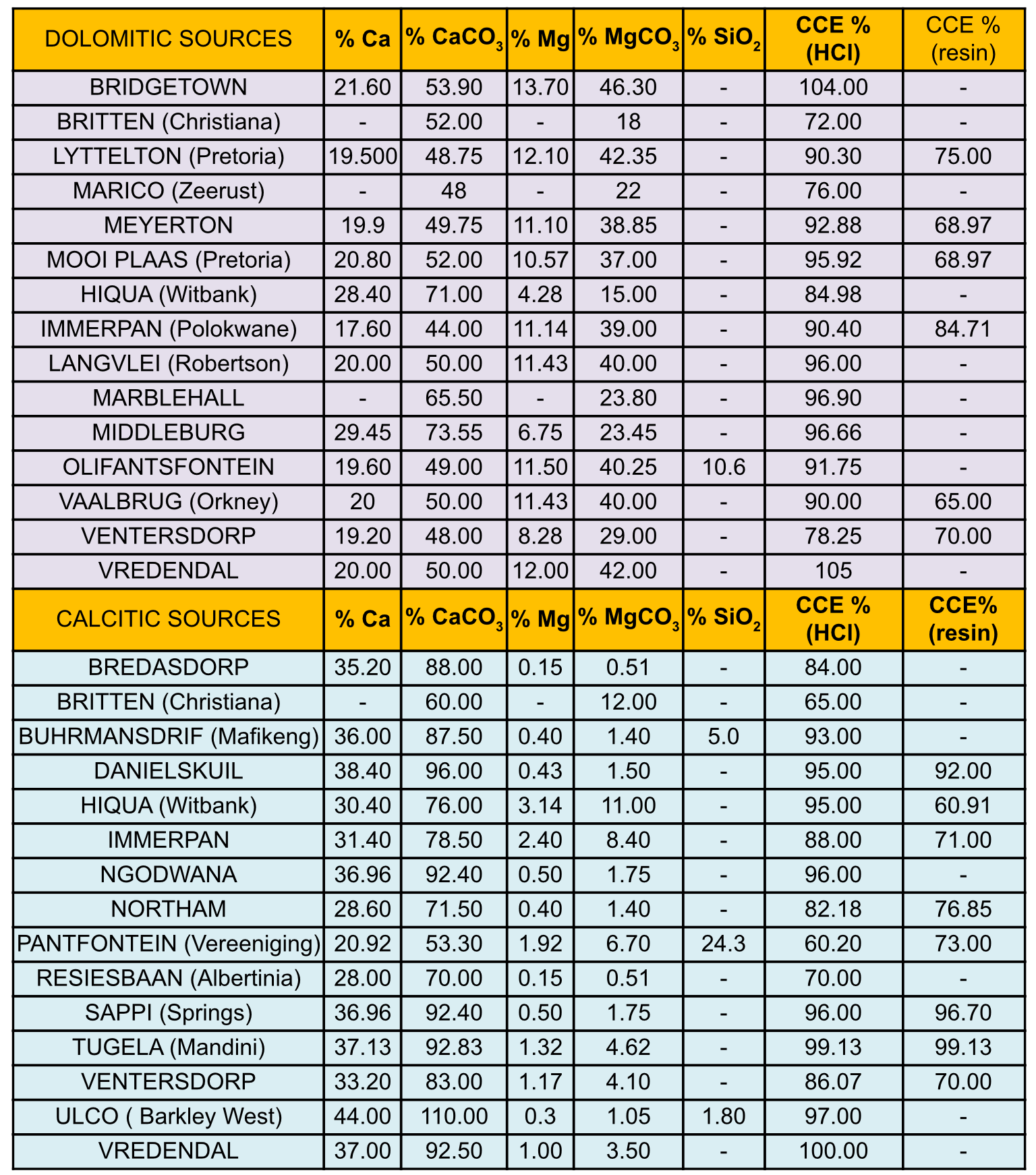 Soil acidification is a natural phenomenon which unfortunately is accelerated by numerous agricultural practices including the application of nitrogen sources containing high rates of ammonium (NH4+) nitrogen . A regular soil sampling and liming program should be central to every fertilizer program to ensure that soil productivity is not limited due to unchecked increases in soil acidity. South Africa has an abundance of good quality agricultural lime sources which are geographically well distributed and ensure that a responsible lime program is affordable. Disclaimer: The figures published are not a guarantee of analysis, they are sourced from published Product Data Sheets and provided to serve as an indicator of typical analysis which may vary due to changes in minerology of the lime sources. Please note: Consult a qualified person (Act 36 of 1947) for specific applications / recommendations.

SOURCES OF GYPSUM IN SOUTH AFRICA

Gypsum (CaSO4.2H2O) and its dehydrated forms are relatively common minerals that are distributed worldwide in sedimentary and evaporative deposits and produced as bye products of various industrial processes. The main sources of gypsum are from the production of phosphoric acid from rock phosphate; gypsum produced from this process is a finely grained high purity material and is commonly referred to as phosphogypsum (PG). The main sources of PG in South Africa are located in Modderfontein, Phokeng, Potchefstroom and Phalaborwa which are reported to carry in excess of 15 million tons. Other sources of gypsum are produced from flue gas desulphurization (FGD) in industrial processes in which Sulphur Dioxide (SO2) is scrubbed to meet SO2 emission standards. There are numerous deposits of natural gypsum in the Cape which are mined. Natural gypsum tends to have a larger particle size distribution than gypsum produced from industrial processes unless it is milled finely. The effect of particle size is an important factor in determining the effectiveness of gypsum amendments. Gypsum is slightly soluble in aqueous solution, dissolving to an extent of 2.5 g / l. Natural gypsum may contain traces of calcium carbonate and therefore may reflect slightly alkaline pH levels on analysis, while PG may contain free acid which may reflect as slightly acidic on analysis. Overall Gypsum has very little effect on soil pH. South African agriculture utilizes approximately 200 000 tons of gypsum per year which with an approximate 18% Sulphur (S) content provides a cost effective source of S. Disclaimer: The figures published are not a guarantee of analysis, they are sourced from published Product Data Sheets and provided to serve as an indicator of typical analysis which may vary due to industrial impurities and changes in minerology of the natural sources. Please note: Consult a qualified person (Act 36 of 1947) for specific applications / recommendations