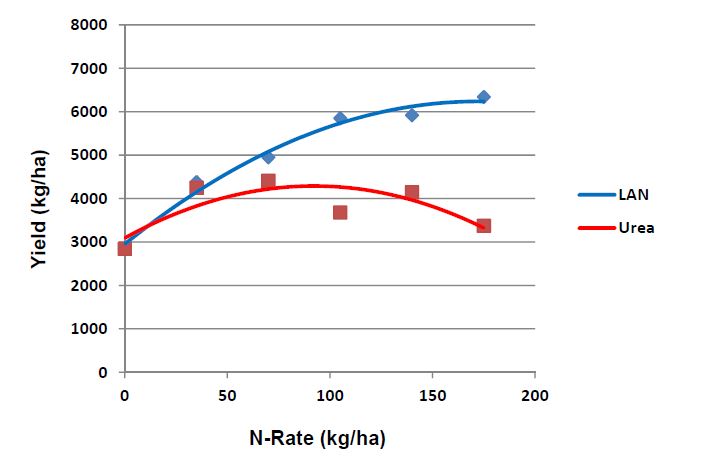 Efficacy of LAN compared to urea under dry conditions for maize 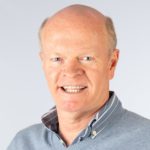 For applications, 2 weeks after planting a nitrate-N: ammonium-N ratio of 1:1 resulted in higher yield than a 1:0 or 0:1 ratio (Adriaanse and Human, 1993). Similarly it was demonstrated that combinations of nitrate and ammonium were better than either ammonium or nitrate on their own under field conditions (Adriaanse, 1990 and Adriaanse and Human, 1991). When LAN dissolves in soil water it is already in a 1:1 nitrate-N: ammonium-N ratio and readily available for uptake. In contrast urea is not readily available for uptake to the same extent when dissolved in soil water. The rate of direct urea uptake is slower than for either ammonium-N or nitrate-N. Ammonium-N will also inhibit direct urea uptake. Even if nitrate-N concentration is 25% less than urea-N it will still be taken up quicker than urea-N. After hydrolysis, urea will firstly result in a 0:1 nitrate-N: ammonium-N ratio and only after nitrification will more ammonium be converted to nitrate. The time period for these processes to take place may vary from a few days to several weeks. Low temperatures, wet conditions and low soil pH will delay these processes. In addition urea is more toxic, leaches more and is more volatile compared to LAN (Adriaanse 2012a).

Many studies have shown better yield responses to LAN compared to urea in long term trials over years as well as over different localities (Adriaanse, 2012a, Adriaanse 2012b, Mangle and Hawkins, 1995, Levington Agriculture, 2009, ITGC, 2004, Avails, 1998).

The objectives of this study under a particular dry season were to determine:

Materials and Methods
Research done by the ARC-GCI in the Viljoenskroon district was carried out over a three year period from 1998 to 2000 on the same plots. The long term annual rainfall average for this area was 592 mm. The soil was from the Avalon form (RSA) or Luvisol (international) containing a soft plinthic layer, varying in depth from 1.2 m to 1.7 m. The soil clay content for different depth increments was 9.1 % from 0 to 15 cm, 10.4 % from 15 to 30 cm and 16.0 % from 30 to 60 cm. Under these specific conditions nitrogen will leach to reach the water in the water table, but it will also move upwards with the water table. Leaching of nitrogen is therefore restricted and movement of water in the sub soil is also much slower due to the higher clay content. Every year the trial was preceded by a rip on row tillage practice to a depth of 0.6 to 0.7 m.
Treatments consisted of five N rates (35 to 175 kg N/ha, three application times (before, at and after planting) and two N sources (LAN and urea) plus two controls (0 kg N/ha). Treatments were arrangement in a factorial combination and a randomized block design with two replications. Applications were either, three weeks before, at or after planting, 10 to 15 cm from the row, at a depth of 10 cm, manually by hand. Except for the control, 20 kg N/ha of each N rate was applied in the form of LAN together with 30 kg P/ha (Triple Superphosphate 20%) and 30 kg K/ha (Potassium Chloride) 5 cm away and 5 cm deeper than the seed with a specialized planter at planting. The maize cultivar PANNAR 6479 was planted at row widths of 1.5 m on 18/12/97, 23/11/98 and 5/12/99 to effective plant densities of 26514, 27083 en 25069 plants/ha respectively for the three seasons. Only results from the last season’s planting were selected due to a particular interest in effects of a dry spell that occurred after planting. Treatment effects over seasons have been reported previously (Adriaanse 2012a, Adriaanse 2012b).

Timing of N-applications
The application of both N-sources 3 weeks after planting was most effective followed by applications before planting and then followed by applications at planting which was much less effective (Figure 1). This trend was similar to responses over seasons, as was previously reported (Adriaanse, 2012a; Adriaanse, F. G., 2012b.) except for LAN which performed better when applied at planting than before planting over seasons.
LAN compared to urea for time treatments over N-rates
LAN was more effective than urea over N-rates particularly for applications at planting but also for before and after planting applications (Figure1). A yield difference between LAN and urea of as much as 3.2 ton/ha for applications at planting was observed (Figure 1). Ammonia toxicity due to the band placement of urea at row widths of 1.5 m, which resulted in high concentrations of urea under very dry conditions, was probably largely responsible for this. A lack of adequate rain after planting would also have resulted in a reduction in vertical spread of urea and thus would have concentrated it even more. Ammonia volatilization from a depth of 10 cm in a sandy soil could also have contributed to this negative result from concentrated urea. 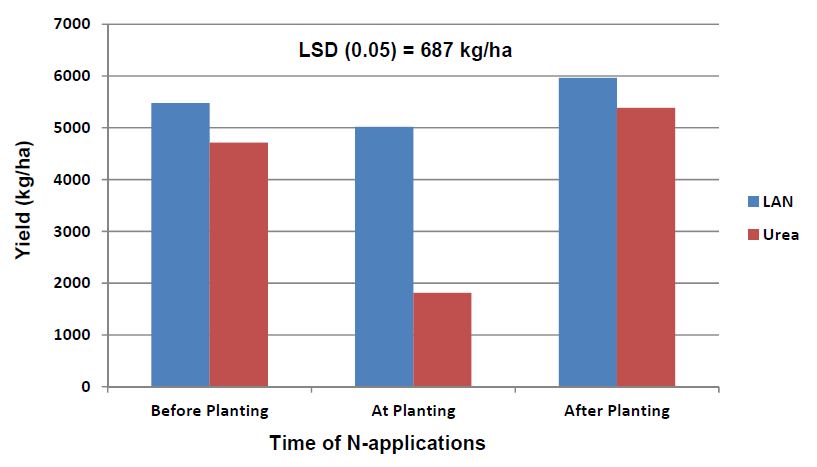 LAN compared to urea for N-rates over time of application

On average LAN was more effective than urea over time of application (Figure 2). Band placed urea-N applications > 15 kg/ha (35 minus 20 kg N/ha in the plant mixture) resulted in much lower yields than for LAN at comparable N-rates (Figure 2). Yield at 155 kg LAN-N/ha was 3.0 ton/ha more than with urea at the same N-rate (Figure 2). This difference is mostly ascribed to ammonia toxicity effects and possibly also ammonia volatilization resulting from concentrated urea applications.

Figure 2. Yield responses to N-rates averaged over times of application for the 1999/2000 season. At planting 20 kg N/ha of each N-rate, except the control was applied as LAN in the plant mixture (ARC-GCI, Research Report, 2000).

Risk Management
Risk can be reduced by applying most N after plant rather than before or at planting. In relatively dry areas (< 700 mm/year) most N should be applied 3 to 4 weeks after planting but in wetter areas (> 700 mm/year) 4 to 6 weeks after planting. A firm decision to follow this practice will reduce risk but will also postpone the time within the season that risk is taken. When it becomes clear that the season will remain very dry N-rates can be reduced or no further N can be applied in order to reduce the risk of a profit loss.

Note:
Consult a qualified agronomist for locality specific applications. The results referred to in this article were obtained under specific conditions and are therefore not generally applicable under all conditions.