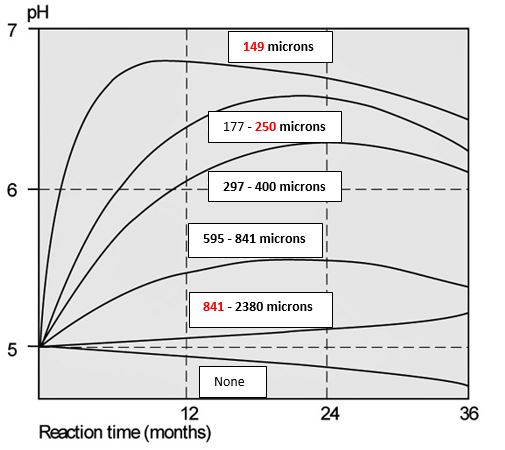 South Africa has an abundance of agricultural lime sources distributed throughout the country which should enable farmers to source lime as economically as possible. Lime is classified as a Group 2 fertilizer and regulated by The Fertilizer, Farm Feeds and Agricultural Remedies Act of 1947 (Act 36 of 1947). Dolomitic and calcitic lime sources are used to ameliorate soil acidity, Al3+ and Mn2+ toxicities, raise soil pH and manage calcium and magnesium levels in the soil. The sources of lime may be of both natural and industrial origin and vary significantly in their chemical and physical properties which in turn will determine the efficacy the product being used.

In the article, Soil Acidity and its Management in Crop and Pasture Production; Miles and Farina indicate that the effectiveness of various liming materials varies widely, with the following factors being of particular importance:

Where uncertainty exists as to the quality of a particular liming material, they advise that a sample should be submitted for analysis.

The rate of chemical reaction

When lime is applied to the soil it reacts with the acidic components of the soil, H+, Al3+ and Mn2+ , the rate of chemical reaction is determined by temperature, surface area for reaction, relative concentration of the reactants and the presence of soil moisture.

The CCE of lime will vary according to the calcium (Ca) and magnesium (Mg) content as well as other impurities such as sand and clay; large variances in CCE may exist between different sources of lime. The minimum CCE of lime in terms of Act 36 is 70%.

The CCE of a lime does not indicate how quickly it will react, particle size is a key factor in determining the rate of reaction within an acid soil; the finer the particles the greater the surface area for reaction.

Now refer figure 1 below; research has shown that:

The effective rate of reaction in the soil is determined by the rate at which the granule breaks down. Lignosulfonate, molasses and other agents are used to bind the micro fine particles into a granule; breakdown of the granule will be determined by dissolution of the binding agent by water and microbial activity before the full reactive surface area of the micro fine particles are exposed and available to react.

When lime granules are incorporated in the soil they are held firmly in place by the surrounding soil (as shown in photo 1 below) and the micro fine particles are restricted to a smaller volume of soil. The fourth factor determining efficacy of lime is the degree of incorporation in the soil. Greater efficiency would be achieved if micro fine lime was spread and thoroughly mixed in the soil. 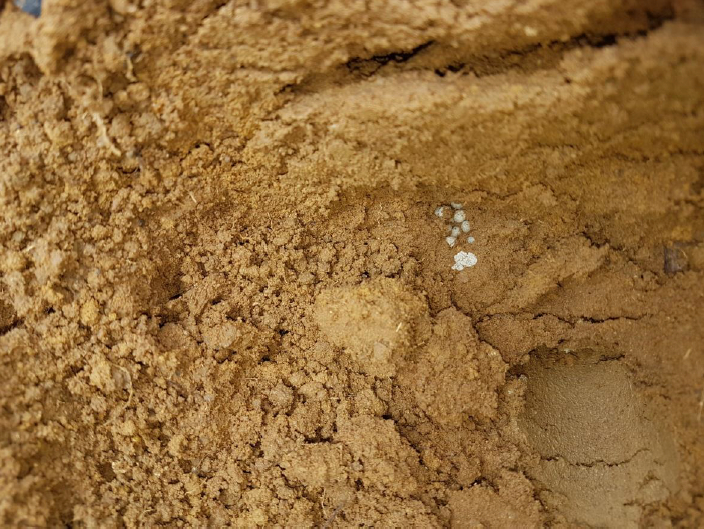 Photo 1: Shows that the granular lime is still intact in the soil after being in the soil for ± 3½ months

Some benefits of granulated lime include:

However these benefits need to considered in light of the following limitations:

Liquid lime is sold as a suspension; typically the particles are finer than 0.149mm and mixed in water using clay to hold them in suspension. The benefits of using liquid lime include ease of handling, precise application and a fast reaction time due to the fineness of the lime particles relative to a standard lime.

Liquid lime has been recommended as at highly effective source of lime due to the reactivity of the micro fine particles, so much so that claims have been made that 10l of liquid lime will provide the same benefit as 2 tons of standard lime!

The same factors that determine the efficiency of standard lime determine apply to liquid lime; rate of application, CCE, particle size and degree of incorporation. Referring to Figure 1 above, particles finer than 0.149mm will completely react within six months of application, the increase in pH is short-lived due to the faster reaction time.

Empirical calculations that a low volume of liquid lime will significantly raise the soil pH are flawed. pH is a measure of H+ in the soil solution and doesn’t indicate the presence of Al3+ or Mn2+ or the exchangeable acidity of the soil. Any perceived increase in pH will be short lived due to chemical equilibria reactions within the soil as H+, Al3+ and Mn2+ cations will be released by the clay particles to take the place of those neutralized by the lime.

Movement of micro fine liquid lime down the soil profile will be determined by the soil texture and is only likely to take place in sandy soils with a clay content less than 15%.

Having taken consideration of the factors determining the efficacy of lime, consideration should be given to assessing the effective relative cost (ERC) and calculate which available sources will be most cost effective. The cost of lime includes, product price, transport, and handling / incorporation; the cheapest source of lime isn’t necessarily the best option.

HCl is a strong acid and doesn’t represent the acidity of the soil, as such CCE (HCl) is not necessarily the best indicator of the neutralizing capacity of a source of lime. An accepted alternative measure of the CCE of a lime is the Resin Method. The regulations of Act 36 prescribe that both the CCE (HCl) and CCE (resin) must be provided by the supplier.

The ERC cost can be calculated accordingly:

The product with the lowest ERC is the most cost effective source.

An alternative method is to adjust the CCE (HCl) using an efficiency rating for the lime based on particle size distribution. Lime particle efficiency may be calculated accordingly: 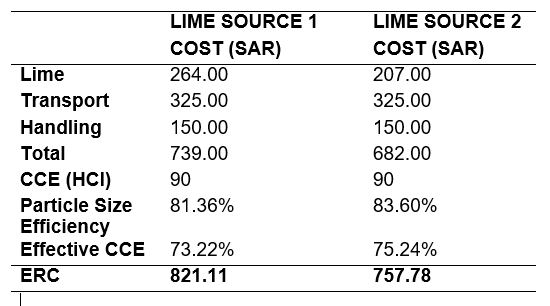 Soil acidification is a natural process which is accelerated through the use of fertilizers and crop removal of base cations. The depletion of organic matter through crop removal and losses due to tillage contribute further to soil acidification, creating an overall hostile environment for crop roots which ultimately effects soil productivity.