By Mark HawksworthMay 11, 2018Conferences and Training
No Comments

The Fertilizer Society of South Africa (FSSA) was founded in 1959 and restructured in 2014  when it became know as the Fertilizer Association of Southern Africa (FERTASA). Adriaan de Lange who served as Chairman of FERTASA since 2014 completed his second term of office and delivered his final chairman’s report at the 2018 FERTASA congress held on 19 April at the Premier Hotel, OR Tambo International airport.

The South African economy grew by 1.3% in 2017 and exceeded the National Treasuries expectation of 1% growth. Economic activity was driven by agriculture with agricultural production increasing by 17.7% in 2017 which contributed to 0.4% of national GDP growth. Agricultural production in the summer rainfall areas was marked by good yields for most crops and high income from animal products resulting in an overall reduction in South African food inflation which decreased from 9.9% in February 2107 to 4.5% in January 2018, which is a clear indication of the strategic importance of the agricultural industry in South Africa providing affordable food and food security for a growing population.

South Africa achieved a record maize yield in 2017 however the overall trend of reduced plantings continued as farmers moved to more lucrative crops and diversified their operations. The world wide surplus production of maize caused the maize price to plummet from a high in excess of R4000.00 in 2016 to below R2000.00 in 2017. The drop in the South African maize price was exacerbated by the change from import to export parity pricing which led to the enigmatic situation that farming debt in the summer grain production areas increased despite a record crop being harvested. 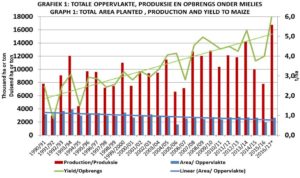 The surplus production of maize and resultant lower prices has led to increased plantings of soybean over the past eight years with a result that soybean production also achieved a record yield in 2017. International soybean prices has tended higher recently which bodes well for the future of local soybean production provided that the processing capacity for soybeans increases and cultivars more suited to South African conditions are developed to increase the overall yield per hectare.

Agricultural crop production in the winter rainfall areas has been seriously  affected by the worst drought in a hundred years in the Western Cape which is continuing; the wheat yields ranged from 2 – 3.5 tons/ha in the Swartland and very low to almost no yield in other areas. Fruit and grape production had mixed results whereby exports of fruit and wine was favoured by the weak Rand and in some cases the extreme drought conditions enhanced wine quality; however the quantity produced was severely affected. The Western Cape Dam levels are currently down to 18.95 from 26.9% in 2016 and the Western Cape has been declared a disaster area, fortunately relief measures are being implemented.

Fertilizer prices have stabilized internationally and production is increasing however demand hasn’t increased which has put prices under pressure. de Lange commented that fertilizers are currently trading at production cost rather than at supply and demand fundamentals which has resulted in a stable and low price over the last two years in US$ terms. 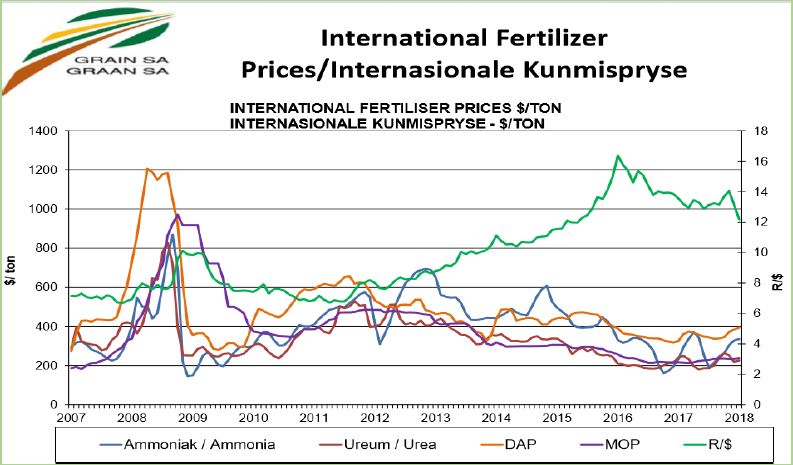 The Rand has recently strengthened against the US$ , as the storm of “junk status” has eased as change in South Africa brings hope for economic recovery. These two factors should have a downward effect on local fertilizer prices as local prices are largely determined by international prices coupled with the US$, however a large portion of the delivered cost of fertilizer is locally derived. The escalation of costs due to South African challenges such as inflation, increased taxes and levies, inefficient infrastructure, basic services and rail operations, expensive electricity and expensive and unproductive labour result in local costs not always keeping track with the international bulk fertilizer index.

The exact figures for sales of agricultural lime and fertilizer are not available, lower fertilizer consumption are expected in 2017 / 2018. The widespread occurance and serious nature of subsoil acidity that has been identified especially in the central regions of the Free State could have a serious impact on food production and farming profitability and if not corrected over time should lead to increased agricultural lime sales in those areas. Farmers are encouraged to engage with professionals to review their fertilization and liming programs to address this serious matter of subsoil acidity on a sustainable basis.

FERTASA membership has grown over the past year and on 1 April stood at 70 compared to 52 in 2017. Due to the growing influence of the biofertilizers industry more attention will be given to this important component of the industry in the future, the focus of change was illustrated in the agenda for the Congress and the upcoming Technical Symposium where more emphasis has been placed on the biological aspects of plant nutrition.

Since the initiation of the Code of Conduct Compliance System, 19 FERTASA members have now obtained compliancy certification compared to 10 in 2017. FERTASA has reviewed the recognition of only one audit firm for this voluntary action of members and identified several other audit firms whose audit protocols will be evaluated with the intention to expand the choice of  audit companies for this important certification in the future.

The BASOS / FACTS (Fertilizer Advisors Certification and Training Scheme) course continues to be popular and plays an important role in the training of fertilizer advisors and is regarded as the minimum requirement for sales people not only in the fertilizer industry but also in the seed and agrochemical industries. Since the inception of the course 1215 certificates have been issued, 81 new registrations have been received in 2018 and it is expected increase to 100 during the year; currently 124 participants have registered for the examinations this year which will be written in May and September.

The Fertilizer Bill is know in a final draft and the Department of Agriculture, Forestry and Fisheries (DAFF) is currently busy with socio-economic impact and other analyses and public consultation in preparation to gazette the Fertilizer Act. A concerted effort was made to gain consensus within the fertilizer industry including non-members of FERTASA on the principles that should be included in the Bill. The most important principles that were proposed by the fertilizer industry were:

These principles were all included in the draft by DAFF and in fact the council option was not included and alternative mechanisms were sought which have been accepted by FERTASA members. De Lange stressed the importance of the registration process working well but also to keep the process cost effective. An import feature of the proposed Act is that the fertilizer entities should be approved before being allowed to produce fertilizer, which is in fact an extension of the present compliance certification for entry voluntarily accepted by certain FERTASA members.

de Lange commented that in general, relationships between government and industry are not strong and improvement will help industry achieve a consultative approach to reach a point that works for government to achieve their goals and also support the industry. He highlighted the work done on the Fertilizer Bill as an example of industry working together with DAFF and encouraged members to promote FERTASA to non-members to align the industry around FERTASA for communication with government to further achieve positive outcomes in the future.

The FERTASA fertilizer registration service continues to be popular and the backlogs of Group1 and 2 fertilizers of the past have largely been eliminated. Group 3 registrations remain a challenge mainly because of applicants non-compliance with the guidelines however progress has been made and 9 Group3 registrations have recently been passed. The registration of Group 3 fertilizers will be afforded more focus by FERTASA in the coming year and a concerted effort will be applied through workshops and additional guidelines to improve the success rate of Group 3 ‘s registration applications.

The FERTASA Regulations Committee is considering a request from DAFF to assist in the development an electronic operating system and data base for fertilizer registrations.

DAFF have accepted numerous corrections to the 2012 fertilizer regulations that were proposed by FERTASA, Group 3 regulations were also corrected since they were “unclear” for many members; a workshop finalizing these regulations will be held in 2018.

The Fertilizer Handbook  (Afrikaans version) was released in 2016 and the English version has been finally completed and welcomed in the industry, there is also an e-book format which is in the process of being compiled and should be available in June.

The Fertilizer Quality Monitoring Scheme was reintroduced and sponsored by FERTASA, Grain SA, Omnia Fertilizers, Sasol Agriculture Trust and DAFF and was carried out in the summer rainfall region as well as the Cape for the first time. 134 fertilizers were randomly selected on farms and analyzed according to a specified protocol; the results were very good considering that no monitoring system had been conducted for the previous two years: 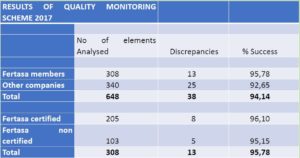 The FERTASA Congress held in Durban and  Plant Nutrition Symposium held in Pretoria were both well supported and very sucessful. Numerous FERTASA members pointed out that subsoil acidity is a serious problem especially in the water table soils of the central Free State but also due to insufficient liming of top soils and sub-optimal fertilization practices. A Subsoil Acidity Workshop was held with scientists Drs Steve Carr and Chris Gazey from Australia. It was concluded that follow up workshops dealing with lime fineness and granulation of ultra-fine lime, principles and practices of fertilization and liming especially regarding subsoil acidity and Ca and Mg nutrition should planned. A Biofertilizers Workshop was also held with international speaker Barbara Novak and experts from South Africa, follow up workshops are being planned.

The FERTASA  website has been redesigned and is now a useful instrument for effective communication and is supported by a quarterly newsletter. FERTASA has also published articles in Grain SA dealing with pseudo science, sub-soil acidity in the water table soils of the Free State and an update article dealing with “bemestingshandleiding”.

The Grain SA crop estimate committee has kindly provided FERTASA with crop production areas per Magisterial District up to 2017 which will enable FERTASA to calculate the fertilizer consumption per magisterial district for the Mpumalanga, North West and Free State provinces with a simple assumption-based program.

FERTASA has maintained contact with the International Fertilizer Association (IFA), the CEO Pieter Haumann is a member of the IFA African Task Force which is involved in determining the fertilizer policy and strategy for Africa and an IFA ambassador for Africa and assists with the collating of fertilizer consumption estimates for South Africa and neighboring countries.

FERTASA has registered as a supporter of East and Southern Africa Fertilizer trade platform ( ESAF) and is also supporting ADASA (Agro Dealers Association of South Africa) who support agro-dealers who sell fertilizer, crop remedies and other farming requirements to subsistence and small scale farmers of South Africa and is assisted by AFAP (African Fertilizer and Agribusiness Partnership).

de Lange thanked the board, members and employees of FERTASA for their support and congratulated the new board which will be chaired by Dr Erik Adriaanse and concluded that FERTASA in now in a strong financial position and that it is perhaps the right time for FERTASA to embark on more ambitious projects to deliver added value to its members.

This article covers selected points of the Chairman’s report click the link below for the complete presentation: