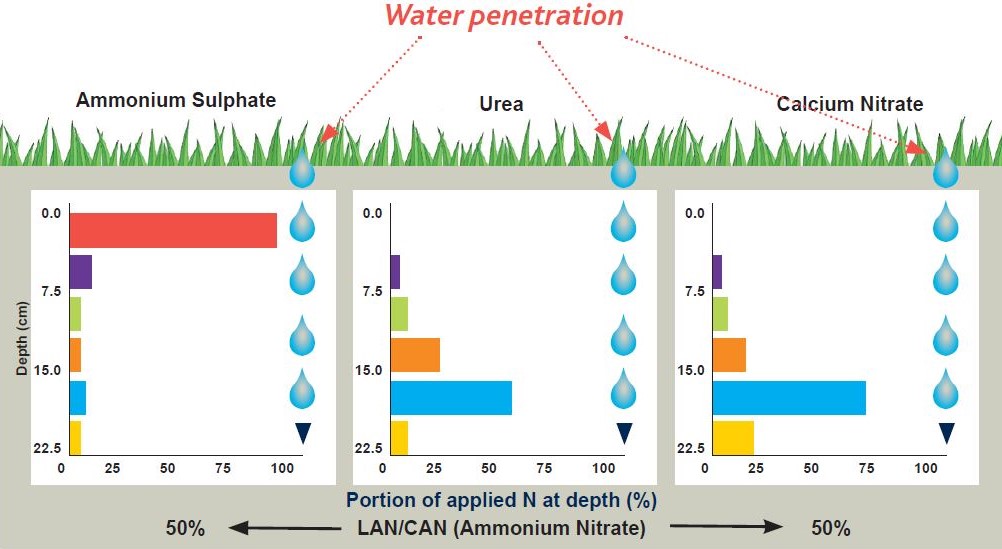 Inorganic nitrogen (N) dissolved in groundwater could be lost for crop production through downward and sideway movements of groundwater, resulting in lower yields and profit margins above costs. Differences in leaching between N sources can effectively be utilized to reduce the risk of N leaching. N management practices such as application methods and timing could also contribute significantly to reductions in leaching losses. Basic scientific principles and case studies associated with severe losses in revenue were used to develop guidelines for combatting N leaching losses.

According to Figures 1 and 2 the immediate leaching potential of LAN is about 50% less than that of Urea. Ammonium-N could however over time be converted to leachable nitrate-N through the process of nitrification. The effect of LAN which was applied shortly before planting and at planting, followed by heavy downpours, resulting in severe leaching are presented in Figure 3. Severe N deficiencies in leaves and in the soil up to a depth of 60 cm have been confirmed with this case study. Yield loss as a result of N leaching was estimated between 7 and 8 ton/ha. Although risks of N-leaching are much less with LAN compared to Urea it is recommended that neither LAN nor urea be applied before planting on well drained soils. 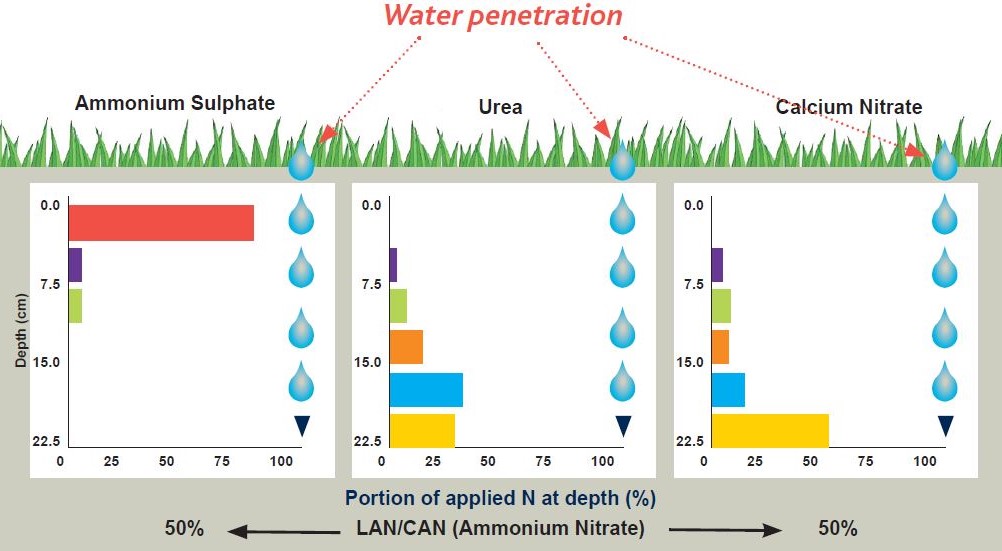 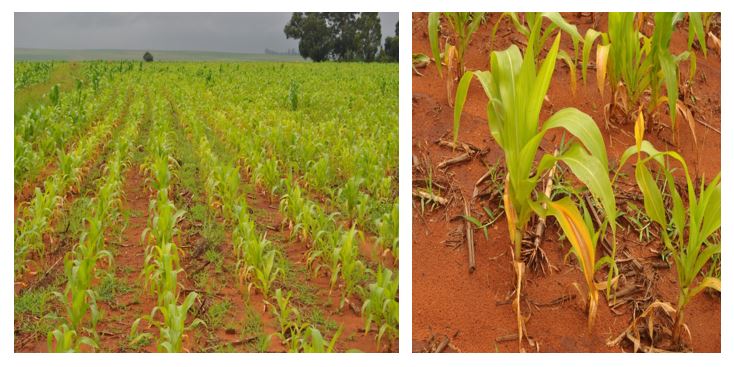 Figure 3. Leaching of LAN broadcast two weeks before planting at a rate of 63 kg N/ha and band placed at planting as part of a plant mixture at 40 kg N/ha. More than 100 mm rain was recorded shortly after planting on this well drained Sandy Soil. Typical N deficiency symptoms showing a reverse V-Shape on the oldest leaves were visible (Sasol case study 2010/2011). 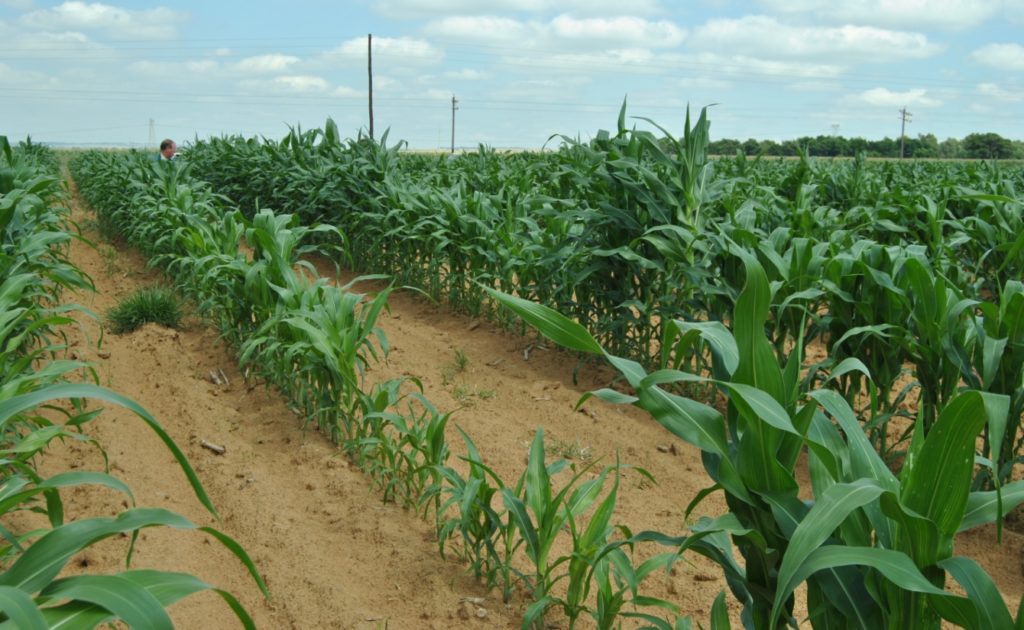 Figure 4A: Vertical and lateral movement of nitrogen (N). 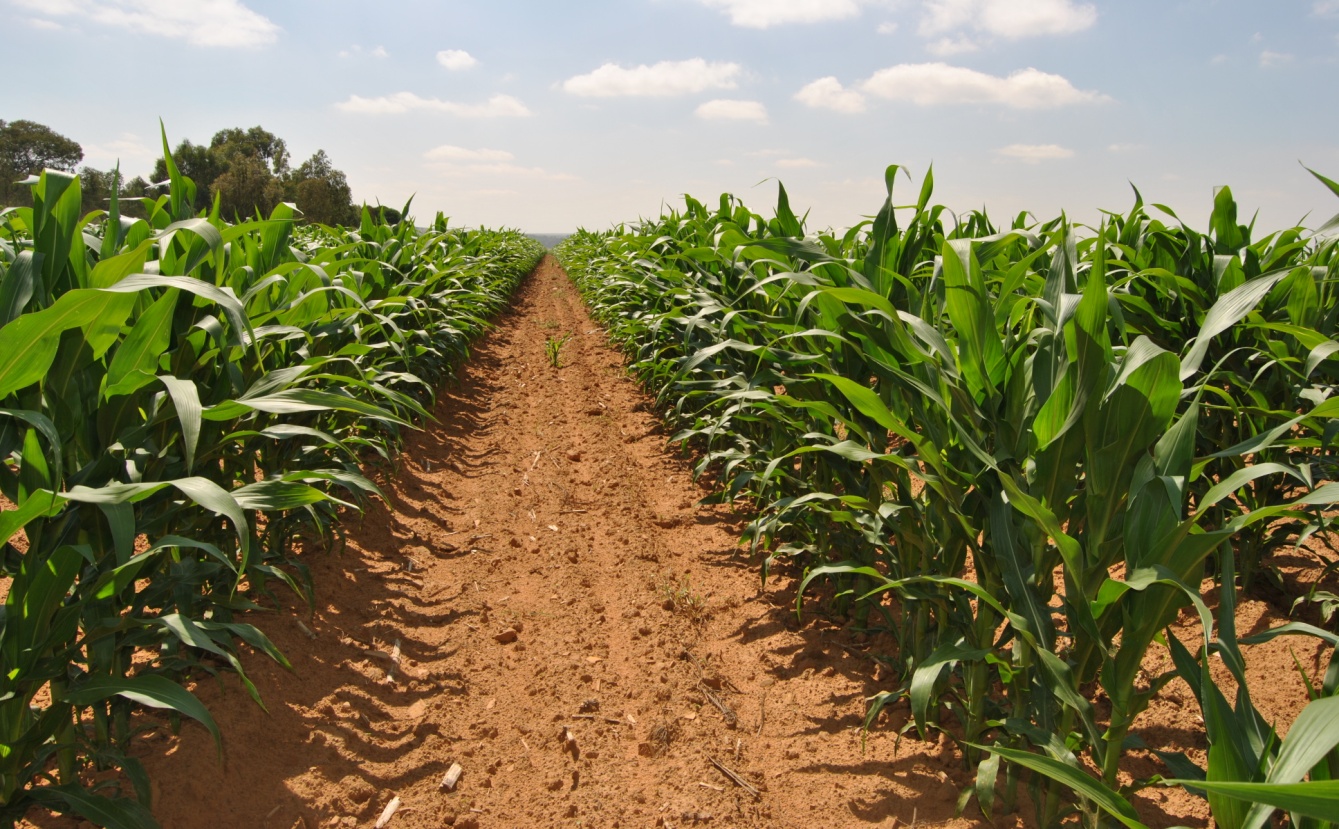 Figure 4B: Compare the vertical and lateral movement of nitrogen (N) in A, B was planted eight days later than A adjacent to A on the same field. A received 110 mm and B 14 mm rain from planting to topdressing. N was applied as Ammonium Nitrate at a rate of 29 kg/ha in the plant mixture and in the form of UAN at a rate of 63 kg N/ha as a topdressing. The clay content for the depth increment 0 to 60 cm was 11% for both A and B (Sasol case study 2010/2011).

The effect of vertical as well as lateral movement of applied N due to excess rain is visible in Figure 4. N analysis in a strip over the rows to a depth of 750 mm was 39 kg/ha for A where the maize was yellow and stunted but 179 kg/ha where the maize was much more prolific and also greener. N analysis between the rows where N was not applied was 32 kg N/ha in the top 60 cm soil for both A and B. Variation in crop growth was therefore directly related to variation in soil N analysis over rows. This effect is often observed under high rainfall conditions on sandy soils, irrespective of time of N application. These symptoms are often incorrectly ascribed to poor fertilizer quality or uneven applications.

What could we do to reduce the risk of N-leaching?

PLEASE NOTE: Consult a qualified agronomist for locality specific applications. The results referred to in this article were obtained under specific conditions and are therefore not generally applicable under all conditions.