Ruth Rhodes previously worked for The South African Sugar Research Institute (SASRI) as a soil scientist and is now a private consultant, delivered a well balanced and objective presentation on the definition of soil health, highlighting some prevalent factors affecting soil health and methods of quantifying soil health.

Rhodes initiated the concept of soil health by highlighting “how every soil tells a story” as illustrated below where two soils that started out identically thirty years ago ended up so different due to land use and management: 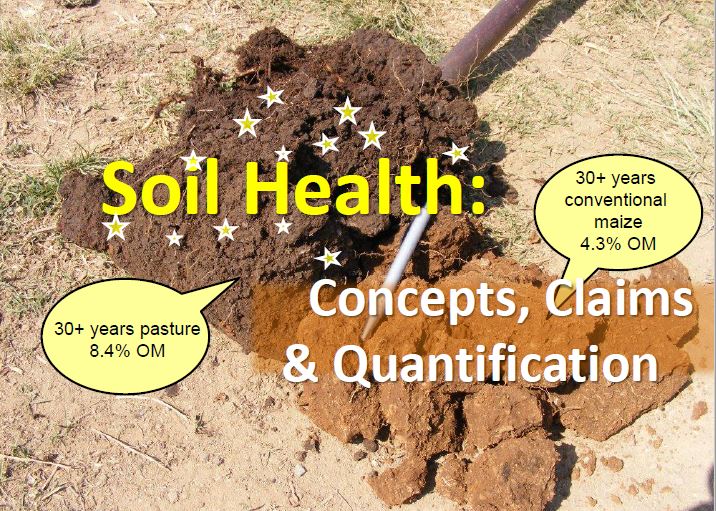 The “term soil health” today is used interchangeably with the terms “soil quality” and “soil condition” and there are various definitions that are used to describe soil health:

Rhodes pointed out that there are many other definitions however we should want our soils to support and  grow optimally yielding crops, “forever” without harming the environment.

The soil food web may be used as the starting point in assessing soil health, however there are over forty different factors that determine soil health which can be grouped into biological factors, physical factors, chemical factors and nutritional factors. Rhodes aptly likened these groups of factors to being the pieces of a puzzle and that if on piece was missing then the puzzle is incomplete: 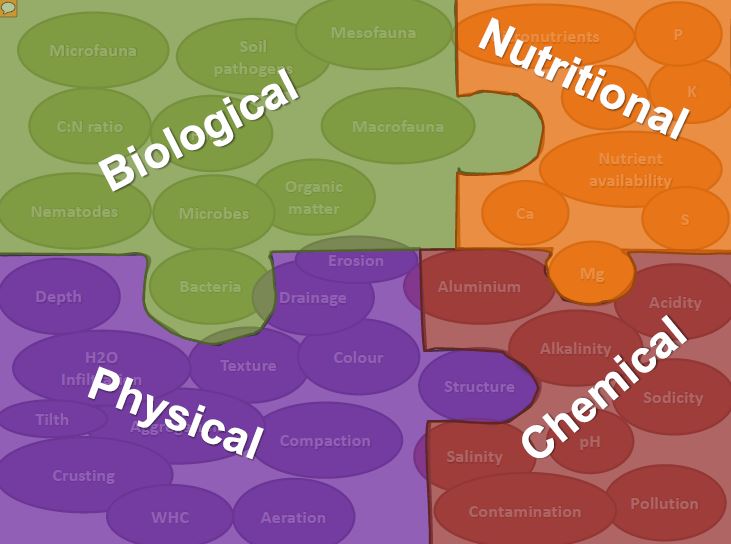 Soil health shouldn’t be viewed in terms of biology only as it is comprised by a whole range of different factors, of the these there are only two inherent qualities that we can’t really control and aren’t affected by management easily; soil depth and texture. They are determined by the factors of soil formation such as climate, topography, vegetation, parent material and time which give soils some kind of inherent health or quality for example comparing a loamy soil to a sandy soil. A loamy soil may seen to be more healthy because it has a higher water holding capacity; or referred to as having a higher “soil capability’.

Dynamic qualities affect soil quality or condition that we can manage, Rhodes proceeded to briefly highlight some of these factors and how the changing nature of soil properties determining soil health may be affected by management.

Soil Acidity is a significant yield limiting factor in dryland agriculture in South Africa especially in KZN and the Eastern Cape and is starting to become a problem in irrigation areas which until recently have not been a familiar with this problem. Soil acidity initially starts off in small patches that expand if not rectified, they can often be identified as areas displaying poor growth (in severe cases not even weeds will grow); “seed vigour” and germination problems resulting from soil acidity have also been encountered.

When we start cropping we change the soil, unfortunately for the worst in many cases; soil chemistry and nutrition change as illustrated by Miles’ diagram below. Organic matter (OM) is decreased as soon as we till the soil, the base metals Calcium (Ca), Magnesium (Mg) and Potassium (K) are removed and the soil pH starts to drop due to the application of nitrogenous fertilizers coupled with the removal of Ca, Mg and K and less organic matter is returned to the soil than should be. After a time period ranging from 5 – 15 years the initial soil pH drops from 5.5 (CaCl) to below 4.5 and aluminium (Al) becomes soluble. 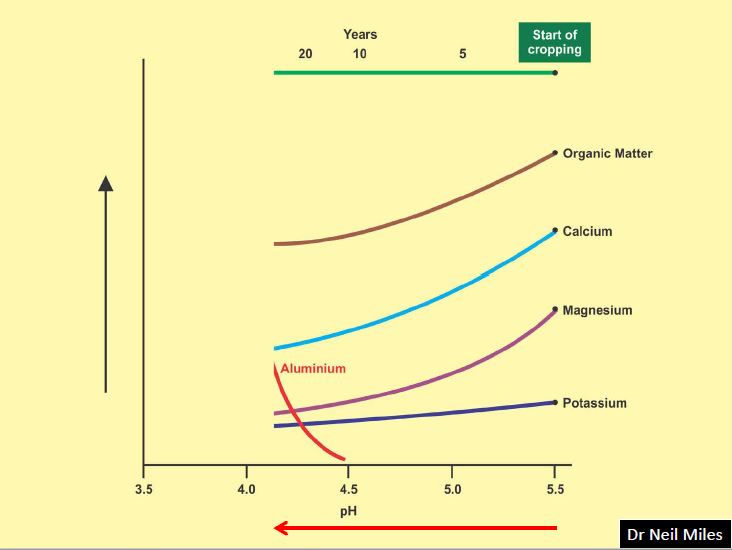 As soil acidification increases bases are replaced by Al and hydrogen (H) resulting in soils with a acid saturation. High levels of Al and sometimes manganese (Mn) coupled with low levels of Ca, Mg, and OM create a hostile environment for the roots which need to be corrected through liming. Liming will increase soil pH, however it is important not to over-lime soils or apply lime where it is not needed especially on high pH soils as excessive liming may lead to deficiencies of the metal micro nutrients Zn, Cu, Fe and Mn. Sub soil acidity is a “hidden enemy”that many farmers may not even be aware of if they’re not sampling correctly and is a widespread problem in the summer rainfall areas resulting in crops with shallow root systems; this can be corrected through the combined use of lime and gypsum.

There is no target or ideal soil pH that famers should aim for however there is a range where all factors function well within the soil; fungi, bacteria and actinomycetes tend to function better at higher pH levels rather than the lower more acidic pH levels.

Compaction from vehicle traffic  during harvesting, loading or application of fertilizer and herbicide causes major stresses while hoof compaction from animal traffic may restrict growth rates and water infiltration especially in pastures. Soil compaction has a serious effect on root growth as well top growth of maize and especially on tree crops.

Hardpans limit root penetration into the subsoil as well as restricting the crops ability to obtain water and restricts soil aeration. We don’t always take cognizance of the fact that poor aeration and low oxygen from compaction and waterlogging reduce O2 and increase CO2 levels in the rooting zone which leads to reduced root and shoot growth and a reduction in nutrient uptake, particularly P and K.

Crusting of the top few centimeters of soil may have a massive impact on water infiltration, aeration of the soil profile, nutrient cycling and soil biology. Long term sugar cane trials have demonstrated the benefits of retaining green tops (trash) as a mulch layer preventing crust formation and improving water penetration and earthworm activity.

Its interesting that biological factors deal so much with soil life however the most important factor in determining soil biology is a component that is mostly dead, the organic matter (OM). OM is the central building block of a healthy soil and effects many of the soil health markers such as infiltration, water holding capacity, soil tilth, nutrient storage, CEC and buffering and soil biology. It is important to build up organic matter levels of soils because agricultural practices remove OM, methods of returning OM include the production of cover crops such as sunhemp and oats or application of animal manure.

A question that is often asked relates to the correct level of OM in the soil. There is no specific level as it depends on soil type, and is also affected by management and the crops planted as shown by Miles’ graphical illustration below. The higher the clay% of a soil the higher the organic carbon content of the soil, a kikuyu pasture has a higher soil organic carbon content than rye grass and maize respectively. 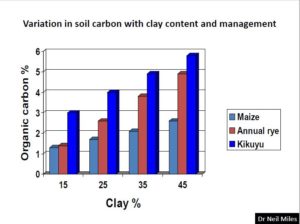 Quantification of claims made on Group 3 products

Claims are often made that certain products improve soil health, stimulate soil microbes and in cases that by using certain products N application may be decreased by one third. More outrageous claims are that yields can be tripled without applying any N or that the application of 10l/ha (equivalent to 0.001 mm rainfall over 1 ha) of a product will rejuvenate soil structure – you have to see it to believe it! This has caused reputational damage and mistrust and it is for everyone’s benefit that claims be quantified  to establish which products are legitimate.

Indicators of soil health include:

The quantification of soil organic matter, physical and chemical factors is easy to ascertain and there a many reputable laboratories that supply these analytical services.

The quantification of biological factors however is somewhat more complex and in order to quantify claims it is important to establish a minimum data set of soil health indicators for a specific product, soil and crop.

Qualitative methods based on field observations are subjective and useful for growers to conduct and monitor change over time and can used with soil health test kits or checklists.

Quantitative methods are laboratory based and suitable for registration purposes of Group 3 biofertilizers. The challenge is to measure soil biological health, counting earthworms is relatively easy – but rapid test methods of measuring soil microbial biomass are required. There is a new range of soil tests now being offered that have been developed in USA and are now included in soil health reports by some international laboratories as a measurement of soil biological health. These test methods include the CO2 release test (Solvita), Water extractable C and N, C:N ratio and Biological N release tests.

SASRI found the Solvita test to be a reliable indictor of soil microbial biomass and organic N reserves and to be sensitive to differences in management practices. There are however no universally-applicable thresholds and values depend on soil type and organic matter levels in the soil; the test is dependent on season so you can’t compare a test done in winter against a test done in summer. The test is most useful on paired sites to compare treatments against a control. It is possible to monitor change over time however results may be confounded by seasonal effects. An additional limiting factor is that results from tests may be confounded as there are cases that higher CO2 respiration may be a result of microbial stress.

These rapid biological soil health tests have great promise however interpretation remains a particular challenge and will remain so for a while. In conclusion the basic goal of a soil quality / health assessment should be to show a trend of soil quality. There are no absolute thresholds or values that we can aim for but it is possible to show a trend of soil health / quality increasing or decreasing. The first soil quality assessment should be a baseline used to evaluate future changes and subsequent measurements should provide information about the trend in soil health.

The most significant indicator of soil health is soil organic matter and levels can be built up fairly quickly using cover crops. The registration of Group  3 products however  is more  complex and claims that certain products improve soil health are too generic even though they may improve an aspect of soil health. The challenge remains in the quantification of claims which cannot be achieved in the short term, successful quantification and registration will most likely be achieved over a longer period of time at significant expense. The development of accurate and reliable rapid tests with universally-applicable thresholds to assess soil health will provide a breakthrough for future quantification of claims on Group 3 products.