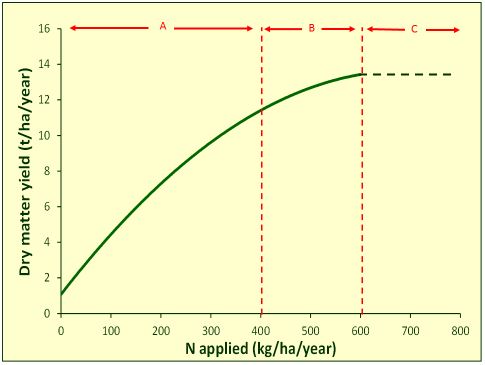 USE OF FERTILIZER NITROGEN ON INTENSIVE PASTURES 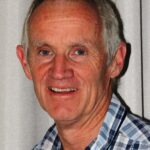 Nitrogen (N) is the nutrient taken up in largest quantities by pasture plants from the soil.  Its availability, together with temperature and moisture supply, are usually the major factors determining the productivity of pastures.

Responses of grasses to applied N

The responses of pastures to fertilizer N have been studied in scores of research trials both locally and overseas.  In South African research, the major focus has been on the N requirements of ryegrasses, kikuyu and Eragrostis curvula (weeping lovegrass), with limited work being carried out on other species such as cocksfoot, fescue and Digitaria eriantha (Smuts fingergrass).  For the relation between grass DM (dry matter) yield and fertilizer N applied, a characteristic response curve is obtained, an example of which is presented in Figure 1.

Figure 1: Response of kikuyu to fertilizer nitrogen (N) in the Highland Sourveld of KwaZulu-Natal (the extrapolation above 600 kg N/ha is to facilitate the discussion in this article).

When N is applied there is usually an initial near-linear response (A in Fig. 1), a phase of sharply diminishing response (B) and a point (C) beyond which N has little or no effect on yield.  The amount of DM produced for each kilogram of N applied within zone A depends largely on the species under consideration, the frequency of defoliation and growth conditions.  Tropical grasses generally produce more DM per unit of N than do temperate grasses.  In field trials, Eragrostis curvula, for example, has produced up to 60 kg DM per kg N applied, but irrigated Italian ryegrass only between 25 and 34 kg DM per kg N applied.  In the United Kingdom, perennial ryegrass produced an average of 23 kg DM/kg N over an N application range of 0 – 300 kg N/ha.  It must be emphasised that data such as these are averages over the season and conceal wide variations in response efficiency within the season.  For example, in perennial ryegrass the spring response is two to three times greater than at other times of the year.

On intensive dairy pastures, the additional feed produced in response to N fertilization is ideally converted into milk production.  A typical conversion ratio is about 15 kg pasture dry matter per kg milk-solids, or roughly one kg pasture dry matter per liter of milk. In South Africa currently, the value of pasture dry matter in dairy farm operations is estimated to be approximately R2000/ton.  In overseas studies, it has been estimated that the response in terms of milk production ranges from 9 to about 16 kg milk per kg fertilizer N applied.  This arises not because of any significant increase in yield per cow, but from an increase in stocking rate, i.e. cows per hectare.

Urea and LAN (limestone ammonium nitrate) are the two most important forms of fertilizer N used on pastures, with other products such as ammonium sulphate being used in lesser amounts.  Grasses take up N in both the ammonium and nitrate forms; however, since ammonium (including the N in urea) is converted to nitrate within a few weeks in well-aerated non-acidic soils at temperatures above about 5˚C, most of the N taken up by grasses is in the form of nitrate.

If irrigation or significant rainfall follows within a few hours of application of urea, ammonia volatilization losses tend to be minimal.  However, where this is not the case, losses can be large: in multi-year field trials on rain-fed kikuyu pastures on acid soils, urea was found to be up to 30% less efficient than LAN in terms of pasture dry matter production.  With pasture annual dry matter yields often being in the vicinity of 14 t/ha, and at a pasture dry matter cost allocation of R2000/t, a loss of even 10% of the applied N clearly negates any financial benefit from the lower cost of urea.  Although the treatment of urea with urease inhibitors usually results in a reduction in ammonia volatilization losses, research shows that inhibitor-treated urea still has potential to lose appreciable amounts of N by ammonia volatilization in the longer term.

As noted above, under good management practices or with favourable timing of rainfall or irrigation, urea is often as efficient as LAN.  However, given the uncertainties relating to the use of urea, it is not surprising that many pasture and other farmers favour the use of LAN.   As one farmer noted, “Use of LAN is an insurance policy against losses, and takes the stress out of N fertilizer management”.